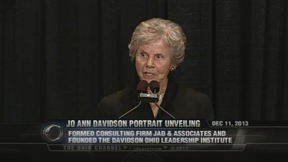 The formal recognition of Jo Ann Davidson in the Statehouse honors a lifetime of civic leadership. Speaker Davidson served as the first woman Speaker of the Ohio House of Representatives from 1995-2000 and as Minority Leader during her distinguished legislative career which spanned 20 years of outstanding public service. Davidson was recognized for her expertise on the state budget, economic development, local government and education. She was a member of the Executive Committee of the National Conference of Legislatures and was Chairman of the Midwestern Council of State Governments.

Davidson was named Public Official of the Year by Governing Magazine, Legislator of the Year by the National Republican Legislator's Association, received Good Housekeeping's Award for Women in Government and was inducted into the Ohio Women's Hall of Fame, as well as being recognized by the YWCA as a Woman of Achievement.

Jo Ann Davidson's local government service included ten years as a member of the Reynoldsburg City Council and also service as Clerk for Truro Township. Davidson also worked as Vice President of Special Programs for the Ohio Chamber of Commerce prior to 1994.

Following her service in the legislature, Davidson formed her own consulting firm, JAD and Associates. Davidson also served as Interim Director of the Ohio Department of Job and Family Services in 2001. President Bush asked her to serve as Co-Chairman of the Republican National Committee from 2005-2008, as well as the Chairman of the Committee on Arrangements for the 2008 Republican National Convention. In 2011 she was appointed as Chairman of the newly-created Ohio Casino Control Commission by Governor Kasich.

Additionally, in 2000 Davidson founded The Davidson Ohio Leadership Institute to increase the number of Republican women involved in public and community leadership service. To date, over 260 women are part of the program, representing over 50 Ohio counties.

With over 30 years of public service, Jo Ann Davidson has been an exemplary role model for those interested in a career in public service. This portrait is recognition of her extraordinary leadership and service to her city, state, and nation.
December 11, 2013
Copyright Disclaimer Terms of Use Contact Us Support