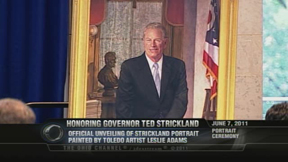 Portraits of Ohio Governors are traditionally painted at the end of a Governor's term or shortly thereafter. Former Ohio Governor Rutherford B. Hayes, who served from 1868 to 1872 and again from 1876 to 1877, is attributed with beginning the collection of portraits. In 1867, Governor Rutherford B. Hayes decided to form a permanent and proper collection of Ohio Governor's portraits to hang in what was a new Capitol building. His vision was to ensure that the history of Ohio and its leaders was not lost. Prior to 1867, only a few of the past governors had been painted. After collecting any graphical representations that were available from the past governors, Hayes set out to complete the collection of those that were missing.

The Strickland portrait, painted by renowned Toledo artist, Leslie Adams, continues the tradition of paying a lasting tribute to the legacies of Ohio governors.

The ceremony began with the singing of the National Anthem by Kimberly Cocroft, Franklin County Court of Common Pleas Judge.

The Strickland portrait and framing was privately funded and cost $40,000. The portrait will be displayed for the public alongside previous Ohio Governors' portraits in the William McKinley Hearing Room (Room 121) in the Ohio Statehouse.

The Ohio Historical Society is responsible for commissioning the portrait of each departing governor. The Capitol Square Review and Advisory Board has the responsibility of displaying and maintaining the portraits in the Capitol building.
June 7, 2011
Copyright Disclaimer Terms of Use Contact Us Support