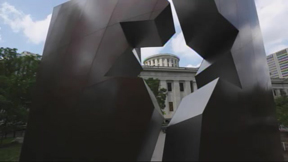 The memorial, which sits on the south plaza of the Ohio Statehouse, serves as a tribute to the victims and survivors of the Holocaust as well as veterans who helped liberate Nazi death camps during World War II.

A celebration and dedication took place at the Ohio Theatre on June 2, 2014, with music by the Harmony Project Choir and an ensemble of the Cleveland Orchestra.

After a short video documenting the vision and development process of the memorial, Gov. Kasich and Daniel Libeskind unveiled the memorial to the audience live.