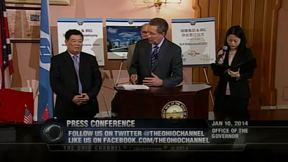 Dewang joined Kasich in the historic Governor's Cabinet Room to sign the paperwork affirming Fuyao's intent to purchase the plant from its current owner, Industrial Realty Group. Fuyao selected Ohio for its first North American manufacturing plant over competitive proposals from states across the Midwest and South. The complex deal was brokered by JobsOhio.

The company plans to acquire over 1.0 million square feet of the former GM Moraine plant and will begin glass manufacturing by the end of 2015. The project will move forward upon finalization of the due diligence process on the building and approval of federal, state and local incentives.

Fuyao, headquartered in Fuzhou, China, employs more than 18,000 workers globally and plans to use its new Moraine facility to supply its growing U.S. customer base, including GM, Chrysler, Hyundai, Honda and Kia.
January 10, 2014
Copyright Disclaimer Terms of Use Contact Us Support