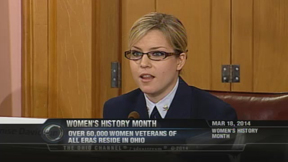 DVD : Women's History Month - Women Veterans in Today's Wars
Women's History Month
Price :
$20.00
Quantity :
Add To Cart Watch Online
A panel of women veterans who served in Iraq and Afghanistan tell their stories in a panel discussion sponsored by the Ohio Department of Veterans Services in honor of Women's History Month. The panel, moderated by Karen Kish, takes place in the Grant Hearing Room of the Ohio Statehouse. The discussion centers on their personal motivations toward the military, their experiences in training and in war, and their views on women in direct combat roles.

Women today make up over 14 percent of America's military. Over 60,000 women veterans of all eras reside in Ohio. They have served with distinction in every war in a variety of capacities, mainly support or medical roles, and became casualties or prisoners of war.

Beginning in the 1980's, military specialties previously closed to women were opened that put them much closer to direct combat, and their roles expanded during the 1991 Persian Gulf War. Today, women serve as pilots and in combat support units that have led to them being directly engaged in the fighting in Iraq and Afghanistan. This involvement has led recently to the lowering of barriers to women serving in direct combat positions, such as infantry and special operations. The U.S. military is currently studying the most effective ways to integrate women into these positions.

-Petty Officer Denise Davidson has served on active duty in the Coast Guard since 2009. Her first permanent duty assignment was to the Coast Guard Station in Destin, Florida. There she participated in numerous search and rescue and law enforcement operations. Currently, she is assigned to the Marine Safety Detachment in Cincinnati. Her unit's responsibilities include search and rescue, homeland security, port safety, security, law enforcement, vessel inspection, waterways management and environmental protection.

-Veronica Anne Minnefield of Columbus retired from the Navy in 2011 after a total of 27 years of service both as an enlisted sailor in grades E-1 to E-7 and as an officer, from Chief Warrant Officer Two to Chief Warrant Officer Four. She is trained in telecommunications, administration, security and law enforcement. She retired in 2011. Today she serves as Assistant District Director of the U.S. Department of Labor Office of Federal Contract Compliance Programs in the Columbus District Office.

-Monica Nicholson of Columbus is an active duty member of the Marine Corps who enlisted in 2007. She served a six-month tour in Afghanistan in 2012. She was a member of the Female Engagement team and a team leader who was responsible for counterinsurgency operations as her unit moved from one forward operating base to another in support of different infantry units. Currently, she is attending The Ohio State University in pursuit of a bachelor's degree and a commission as a Marine Corps Officer.

-Sheila L. Pryor of Mansfield is a Master Sergeant who currently serves as the Information Resource Manager of the 179th Airlift Operations Flight, Ohio Air National Guard. She has been a member of the Guard since 1990, working in the administrative field. Prior to her assignment to the 179th, she worked as a civilian fitness instructor and in newspaper advertising. She is also pursuing a bachelor's degree at North Central State College. She deployed with the 179th to Bagram Air Base, Afghanistan, in 2010.

-Jennifer Lowry of Thornville is a Sergeant First Class in the Ohio Army National Guard, currently serving her 21st year. She joined into an Air Defense Artillery unit as a radio operator. Once the Air Defense MOS(s) opened up to women, she became the first woman to attain the 14J in the OHARNG. She deployed 12 months to Kuwait in 2006 and served as Camp Buehring Base Operations NCOIC. After 14 years, she transferred to Joint Force Headquarters and currently works full time as the Coordinator for the State Partnership Program, a joint security cooperation program linking U.S. states with partner countries.
March 18, 2014
Copyright Disclaimer Terms of Use Contact Us Support