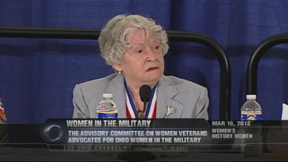 DVD : Women's History Month - Women in the Military
Women's History Month
Price :
$20.00
Quantity :
Add To Cart Watch Online
In this Women's History Month program, you'll hear the personal stories of five women veterans who served in the military during the past wars and the current war. Listen to the contributions women have made and continue to make to the military. The program is moderated by Karen Kish of the Ohio Dept. of Veterans Services and features remarks by Ohio Gov. John Kasich.

Ilene Hall from North Canton, Ohio enlisted in the Women's Army Auxiliary Corps (WAAC) which later became the Women's Army Corps (WAC) on Armistice Day November 11, 1943. Ilene was sent to Daytona Beach Florida for her basic training and then to Georgia for motor transport training. From Georgia, she went to Ft. Lewis, Washington then was assigned to serve overseas in France to assist with the GI's coming from the Battle of the Bulge. She was discharged on December 4, 1945 at Ft. Dix, New Jersey.

Margaret Jean Madden from Columbus, Ohio was commissioned as a 2nd Lieutenant in the Army in 1951 and called to active duty on September 5th. Jean attended Women's Army Corps (WAC) Company Officer's Course at Ft. Lee, Virginia and upon graduation was assigned to 101st Airborne Infantry Training Division in Kentucky. She served in various assignments from 1952 to 1977 to include overseas tours in Heidelberg, Germany and Okinawa, and Ryukyu Islands. Assignments were primarily in personnel management and administration area. Jean served in several leadership positions. In 1976, she became the first WAC officer from Ohio to be promoted to the rank of colonel and retired September 30, 1977 with twenty-six years of service.

Margaret DeLillo-Storey from Canton, Ohio enlisted in the Army in 1981 and completed her basic training at Ft. Jackson, South Carolina. After basic she was assigned to Ft. Sam Houston, Texas for her advanced training as a Combat Medic. Margaret was commissioned as a 2nd Lieutenant in the Medical Service Corps on January 1, 1990. She was deployed for Operations Desert Shield and Desert Storm as the Logistics Officer. She served in several leadership positions and retired as a Major in 2004 with a total of 24 years of service.

Candace Jones from Galloway, Ohio enlisted in the Army in 1982. Her first duty station was Germany as a key punch operator. In January 1986 she was transfered to Ft. Bragg, North Carolina and completed her active duty service in 1987. Candy joined the Ohio Army National Guard and was hired as a full time Active Guard Reserve (AGR) soldier in 1987. She served in several units with the Guard and held many military occupations. In March of 2003 the 323 MP Company she was assigned was deployed to Iraq for a year. She retired from the Ohio Army National Guard as a Master Sergeant in 2009 with over 28 years of service.
March 16, 2012
Copyright Disclaimer Terms of Use Contact Us Support