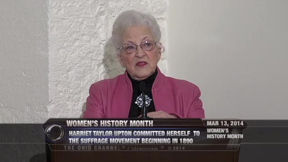 Harriet Taylor Upton was Warren's national celebrity at the turn of the century. Born on December 17, 1854, in Ravenna, Ohio, she moved with her family to Warren in 1862. She graduated from Warren High School in 1873.

Harriet's widowed father, Judge Ezra Taylor, was appointed to Congress in 1880. Harriet accompanied him to Washington, D. C., where she served as his hostess and companion. There she became a favorite in society, both for her literary ability and her amiability of character. She married Attorney George Upton in 1884. They had no children.

In 1890, Harriet committed herself to the suffrage movement and devoted the next 30 years to the passage of the 19th amendment, which gives women the right to vote. She worked closely with her mentor, Susan B. Anthony, with whom she formed a lasting friendship. It was said by the Washington Post, "Mrs. Upton is without a doubt the best liked and wisest suffrage worker in the county. Always in times of stress, the other state leaders have to call on Mrs. Upton." Through her political involvement, she became friends with Presidents Hayes, Garfield, McKinley, Harding and Hoover.

Mrs. Upton had many diverse interests. She was considered an excellent housekeeper, cook, needleworker, gardener, author, realtor, orator, humorist, politician and journalist. She died in Pasadena, California, in 1954 at the age of 90.