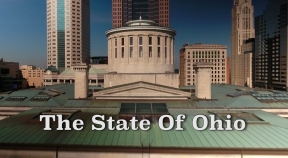 DVD : The State of Ohio - Budget Update Keeps Moving, Energy Freeze On Hold, And New Site Showcases Election Data
The State of Ohio
Price :
$20.00
Quantity :
Add To Cart Watch Online
The various bills that contain the elements of Gov. John Kasich's budget update called the mid-biennium review or MBR are moving through the legislature. This week, one MBR bill that makes more than $400 million dollars in cuts to income taxes and increases in a small business tax deduction passed the Senate on a nearly party-line vote. A rarely used procedure could bring back one of the most controversial bills in recent years to the Statehouse - Rep. Ron Hood (R-Ashville) has pulled a discharge petition to force a vote on the so-called "Heartbeat Bill". Ohio has settled a dispute with the federal government over the use of solitary confinement to discipline some boys in juvenile prisons. And another year, another bitter defeat for the Capitol Cannons, a bipartisan team of state lawmakers playing in the annual vintage baseball game on the Statehouse lawn against the mighty Ohio Village Muffins.

It's been a busy week for the energy standards freeze bill, even though the House committee hearing that was supposed to bring it to a vote was cancelled. This week, a TV ad turned up, paid for by a group against the bill. Its sponsor, Sen. Troy Balderson (R-Zanesville), said he respects the group's right to oppose the legislation but urges that it's just a two-year freeze in order to evaluate the standards' impact on costs. Sen. Bill Seitz (R-Cincinnati) had pushed the original bill to change the standards, and he was more forceful in his critique. Meanwhile, Rep. Bob Hagan (D-Youngstown) said the bill is connected to campaign contributions, which Balderson denies.

And also this week, a coalition of faith leaders joined the opposition to the energy standards freeze. Among them is Pastor Tim Ahrens of the First Congregational Church, United Church of Christ.

While reporters often joke that we went into this profession because we're terrible with math, we need to know a lot more about numbers, percentages and statistics than many other non-journalists. The site ohioelectionresults.com helps put election-related data into sets that are easily understood - and for political junkies and history nerds, are even more fascinating than the data already was. The website was set up by longtime Republican political strategist and consultant Mike Dawson, former press secretary to Gov. George Voinovich and a top aide to former US Sen. Mike DeWine. Dawson is also a formidable and deeply knowledgeable election historian who has mapped out the results of hundreds of Ohio elections over the last 150 years and broken down the most recent ones by contest, by media market, by region, by county, and in many other ways.
May 23, 2014
Copyright Disclaimer Terms of Use Contact Us Support