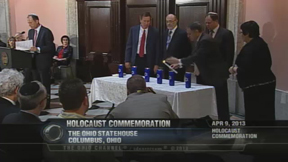 A child of Holocaust survivors, Robert Klein arrived in the United States in 1956 with his parents and two siblings. His late father, Armin Klein, lost his first wife and three children after a Nazi deportation action in their hometown in Hungary. Armin spent several years in Hungarian forced labor camps before being sent to Auschwitz. Mr. Klein's late mother, Jolan, survived Auschwitz's gas chambers twice: once due to a mechanical malfunction and once because of a surprise Red Cross visit. Armin and Jolan met in a Displaced Person camp subsequent to their liberation, married, and rebuilt their lives in Budapest. They later fled to the United States on the night of the Soviet invasion of Hungary. Armin and Jolan Klein's three children and numerous grandchildren and great-grandchildren serve as a rebuke to the Nazi's genocidal plans for the Jews.

Robert Klein is the founder and chairman of Safeguard Properties, Inc., the nation's largest default property management services company. He serves on the boards of several national trade associations and is a trustee of the Jewish Federation of Cleveland. His family's experience inspires his deep involvement in organizations that promote Jewish education and economic relief in the United States, Israel, Europe and the former Soviet Union. Mr. Klein is especially committed to restoring Jewish cemeteries in Hungary, the former Soviet Union, and Cleveland.