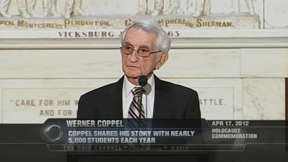 Werner Coppel was born in Germany in 1925. In the spring of 1941, he was sent to a forced labor camp in Neuendorf, near Berlin. In 1943, he, along with the whole group of youngsters, was sent to the Concentration Camp Auschwitz-Buna. In late January 1945, Werner escaped from a Death March and after the war, returned to Berlin. He and his family arrived as "Displaced Persons" in Cincinnati in August of 1949.

Werner served on the Jewish Community Relations Council in Cincinnati and serves on the Board of The Center for Holocaust and Humanity Education. During the last 35 years he has lectured at schools, churches and civic groups in the tri-state area about the Holocaust and its lessons. Each year, he speaks to nearly 5,000 students. In 2001, Werner received a Honorary Doctor of Humane Letters Degree from The College of Mount St. Joseph in Cincinnati. In May, he will be inducted in to the Ohio Senior Citizens Hall of Fame. Werner is married, has 2 sons and 4 grandchildren.