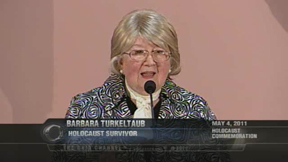 DVD : Governor John Kasich - Governor's 31st Annual Holocaust Commemoration
Governor John Kasich
Price :
$20.00
Quantity :
Add To Cart Watch Online
In the immediate aftermath of the massive death and destruction of World War II, revenge might have satisfied the shock and anger of the moment. But many believed that justice under the rule of law rather than vengeance would better serve humanity. In support of this principle, the Museum is marking the 65th anniversary of the verdicts at the first Nuremberg trial, a watershed moment in international justice, and the 50th anniversary of the trial of Adolf Eichmann, one of the most high-profile postwar recountings of the Nazi genocide and a landmark in public awareness of the Holocaust.

A midlevel SS officer central to the planning and implementation of the "Final Solution," Eichmann was captured by Israeli agents while hiding in Argentina in 1960 and brought to Israel for what would become known then as the "trial of the century."

The Nuremberg and Eichmann trials strove for justice, but what can justice really mean in the face of a crime like genocide? Whether it is prevention, response, or accountability, the Holocaust teaches us that inaction can be deadly; actions, even small ones, can make all the difference for those whose lives are at risk, now and in the future.